Stories from another world 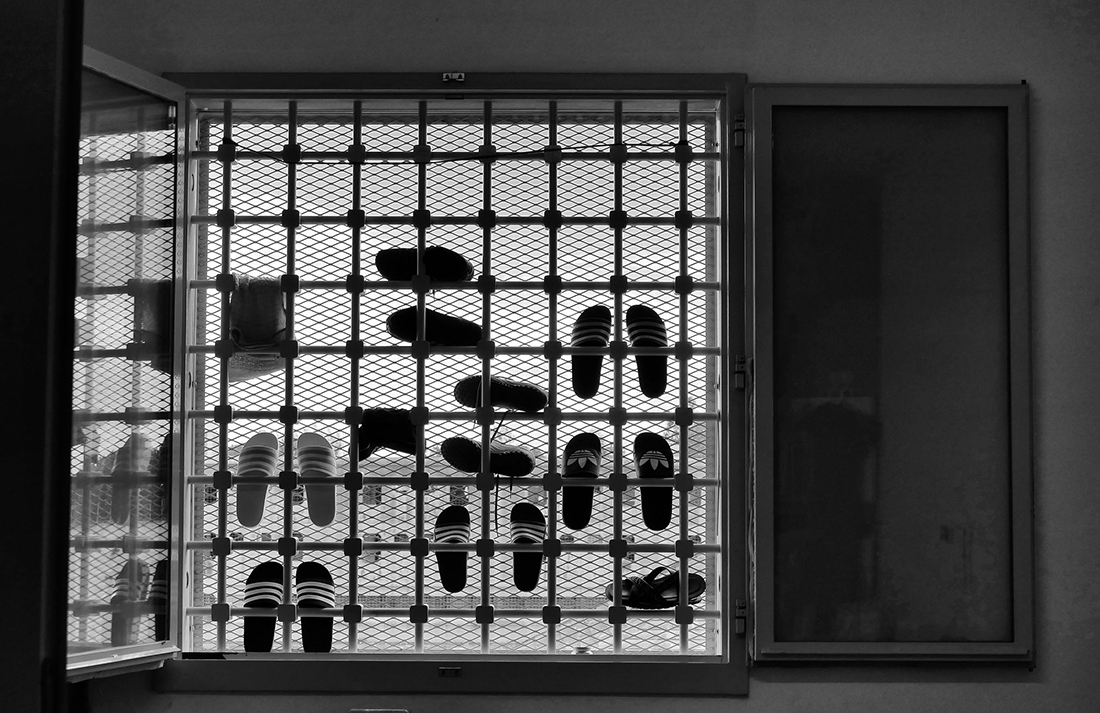 An important equestrian event was held at the Mediterranean Equestrian Centre of the Ambelia Estate of the Equestrian Enhancement Institute for Sicily in Militello in Val di Catania from 8 to 10th of October. The three-day event also brought back to Sicily an important internationally recognised equestrian event, the 36th edition of the competition Aces’ Cup resumed after ten years, organised by the Equestrian Enhancement Institute for Sicily (Istituto Incremento Ippico per la Sicilia) and promoted by the Sicilian Region with Fieracavalli.

Holding such events in the home of the I.I.I. horses (an onomatopoeic acronym that recalls the neighing) seems to close the circle: many of the horses that can be admired are in fact the result of the centuries-old institution mission, dedicated to the preservation, improvement and diffusion of Sicilian horse breeds. The Istituto Incremento Ippico per la Sicilia collects the functional and structural heritage of the Regio Deposito Stalloni, created in 1884 by the then Ministry of War, with the aim of preserving the important genetic heritage of the Puro Sangue Orientale (Eastern thoroughbred). The regional selection of Sicilian donkey and horse breeds and populations is a task that the institution carries out on a regular basis; the stallions bred at the Institute are used annually in the public stud farms located throughout Sicily. 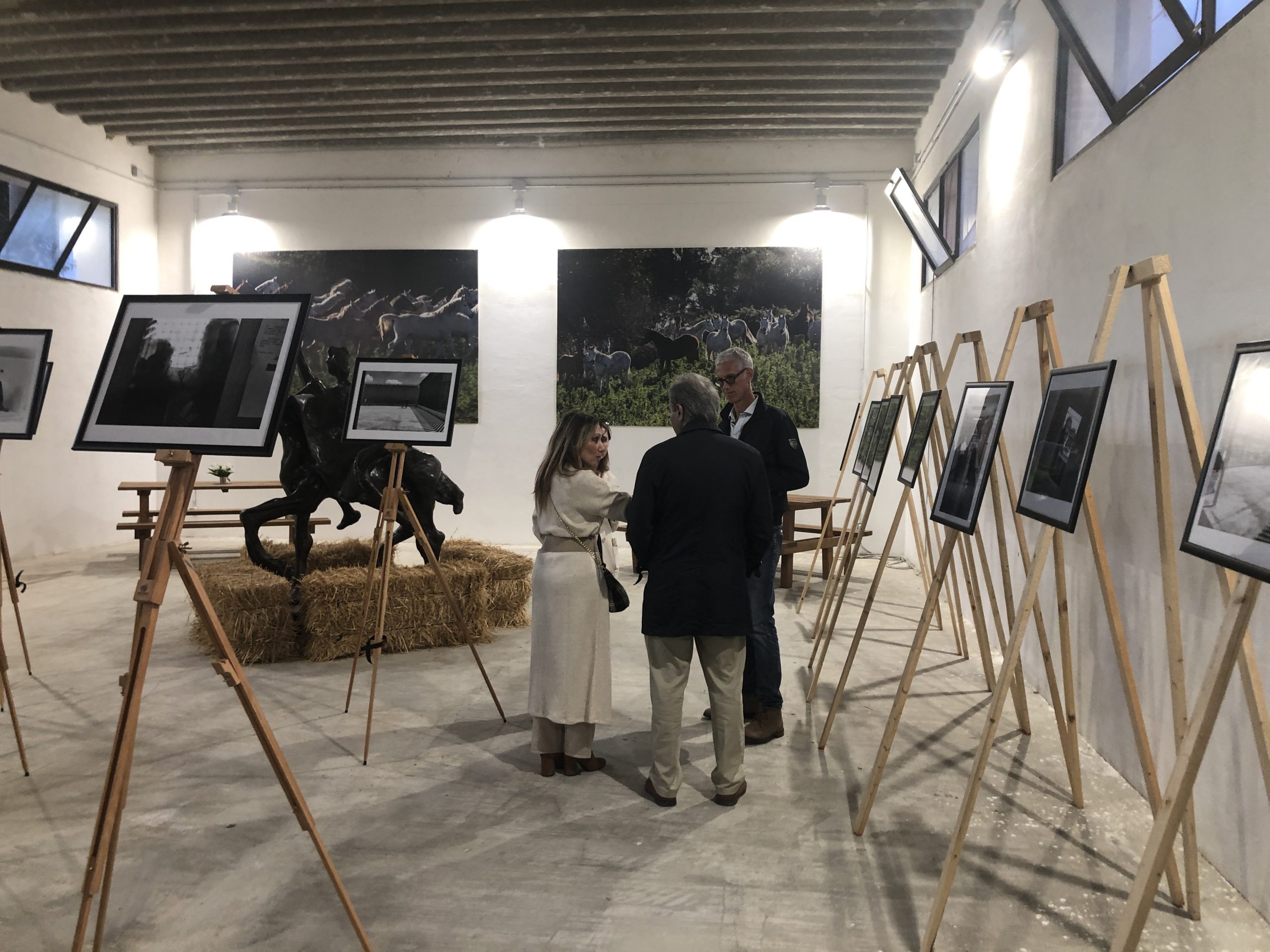 photogrpahy and article by Giovanni Leone

Not being an expert, I do not wish to talk about horses and equestrian shows except to say that even an ignorant is struck by this “couple relationship” between sensitive beings, who seek harmony, evident in the single body rider/horse obstacle race. It is not a continuous run like the gallop but a sequence of gestures modulated and moderated with extreme precision, actions based on a sense of measure in the control of space and the exercise of strength without effort or forcing, a series of rapid stops and goes. Retention and release of energy in an elegant rhythmic fluid motion, in which the alternating strength and grace of two living beings aspiring to a unison movement is tangible. 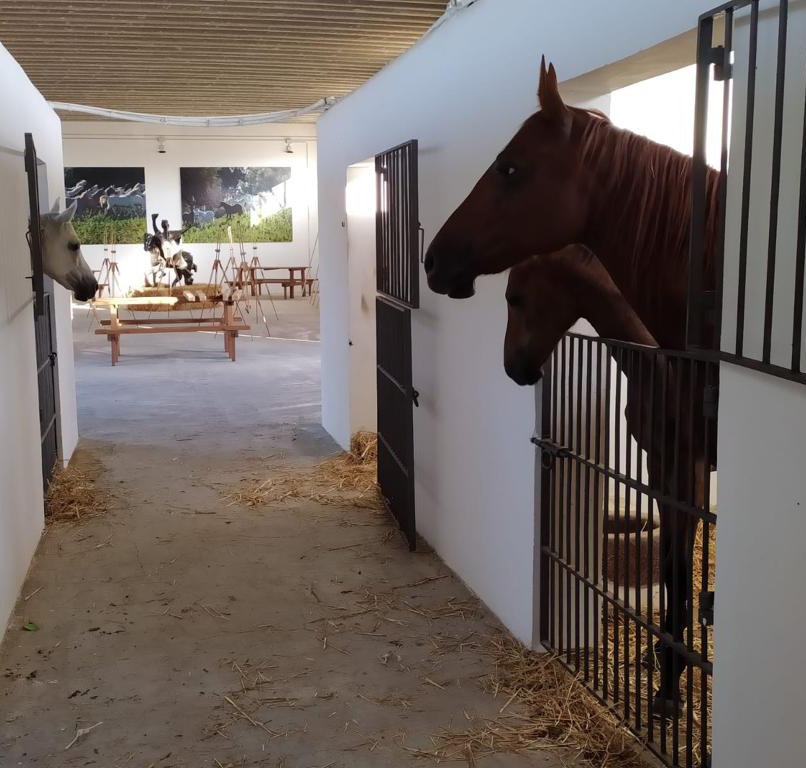 However, I would like to say something about the beautiful exhibition set up in the long stables building, which I visited accompanied by an exceptional guide, Princess Caterina Grimaldi di Nixima, president of the I.I.I. The exhibition is reached after passing through the stables, a space that, for a person not familiar with this, may appear to be a place of confinement because of the gates that resemble to a cage. However, if you look closer you can see that the gate is wide enough to put your arm through and caress the horse or donkey, and that the gate is divided into two parts, one at the top and one at the bottom, a solution similar to that of the houses ground floor in Catania and in other Sicilian rural settlements, where the lower part was closed and the upper part was open so that you could look out and see what was happening on the road. Here, the “road” is the central path of the stable, where the stableman moves back and forth. The stable in Ambelia is far from being a prison, but rather a home for horses and donkeys who benefit of plenty of space. I saw there a thoroughbred oriental broodmare with her foal, a hinny with her mother (a Ragusan donkey that has mated with a thoroughbred oriental horse giving birth to a small horse with big ears), a Pantelleria donkey (smaller, whose population has declined but is not in danger of extinction thanks also to the work of the I.I.I.)

The “street” of the stables ends in a large room and it is in this “square”, around a bronze sculpture of a horse, a beautiful photographic exhibition has been set up entitled Blocco 200 Anime sospese (Block 200 Suspended Souls), directed by Arianna Di Romano, an islander photographer (Sardinian by birth and Sicilian by choice) who, after having done several photo campaigns around the world fixing faces of people and places, reverses the process and goes inside the Caltagirone prison and the heads of the inmates, putting the camera in their hands and giving voice to images that offer new eyes to the observer. The collective exhibition is the result of a photography course for prison inmates held by Arianna Di Romano. The authors of the shots on display are the inmates who took the course and the photographer herself, but they are not indicated in the photographs, a superfluous information: here the “We” absorbs and nullifies the “I”. The subject of the moments fixed on paper are eloquent expressive impressions: how and what I see of/in the prison, what and how I see from/about the prison. 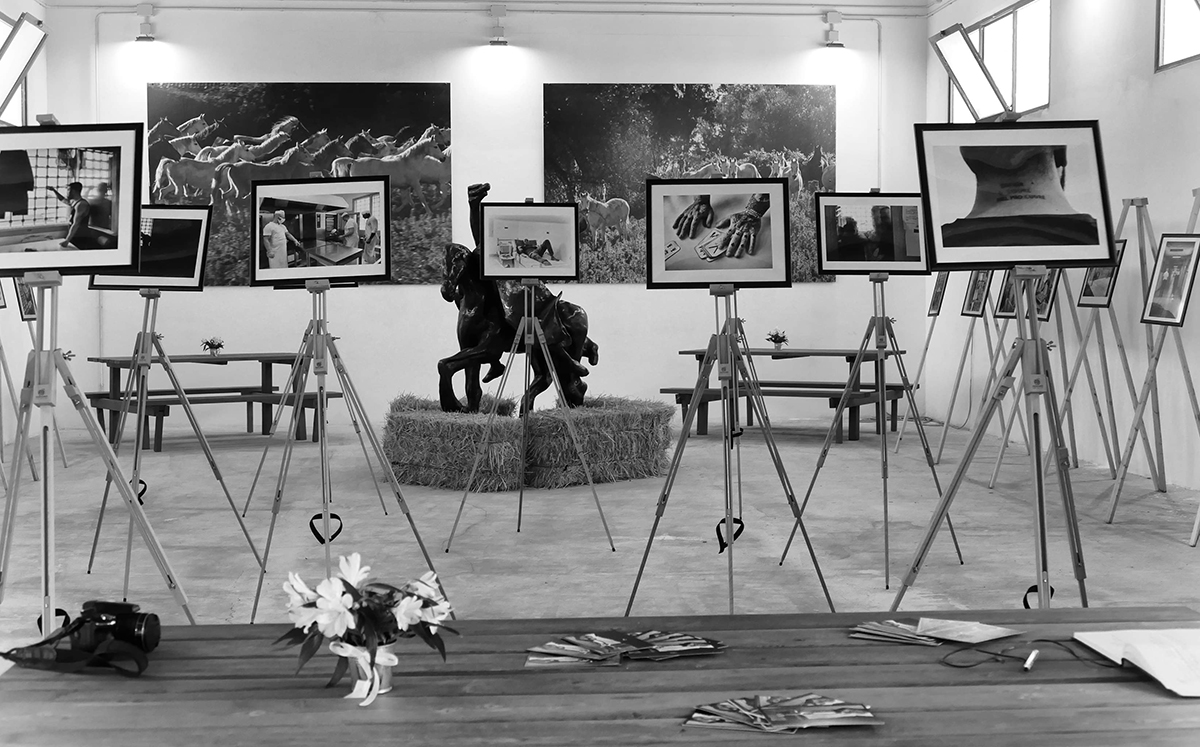 The deprivation of liberty is reclusion, a term that derives from the Latin recludere, composed of re- (meaning repetition) and -cludere (meaning to close), therefore it is to lock up, re-enclose and seems to presuppose a destiny of recurrence of the crime and iteration in the error, it is as if once you are ( a recluse) your destiny remains marked: you are already re-, again and again, a sort of condemnation to eternal return and to the impossibility of emancipation from the condition of rejected citizen, exiled from the community, outcast regardless of the punishment you are serving or have served. Pena (punishment) is a term that derives from the Latin poena, from the Greek poine, from the Sanskrit pûnya which means pure, clean, from which it also comes punish, which is therefore render pure. However, in Italian the term for a person with a criminal record is “pregiudicato”, irreparably compromised and subject to pre-judgment. Prison is an experience of the other world, the closure and confinement involve the experience of an interior deprived of surroundings, the gaze contracts, the faculty to observe is taken away and you are, on the contrary, under observation. The reversal of the point of view that Arianna Di Romano offers us, is therefore interesting. There are many interesting photos, unseen glances that should be observed without rush to acquire new eyes and see what is enclosed in the images that fix an instant of freedom. One photo seems to me to tell the story of imprisonment very well: the observed is the prison guard who stands in the middle of the frame, a figure out of focus because he represents the role not the person and at the same time the distance there is with the photographer, in focus instead, are the bars uselessly permeable to a walled gaze. 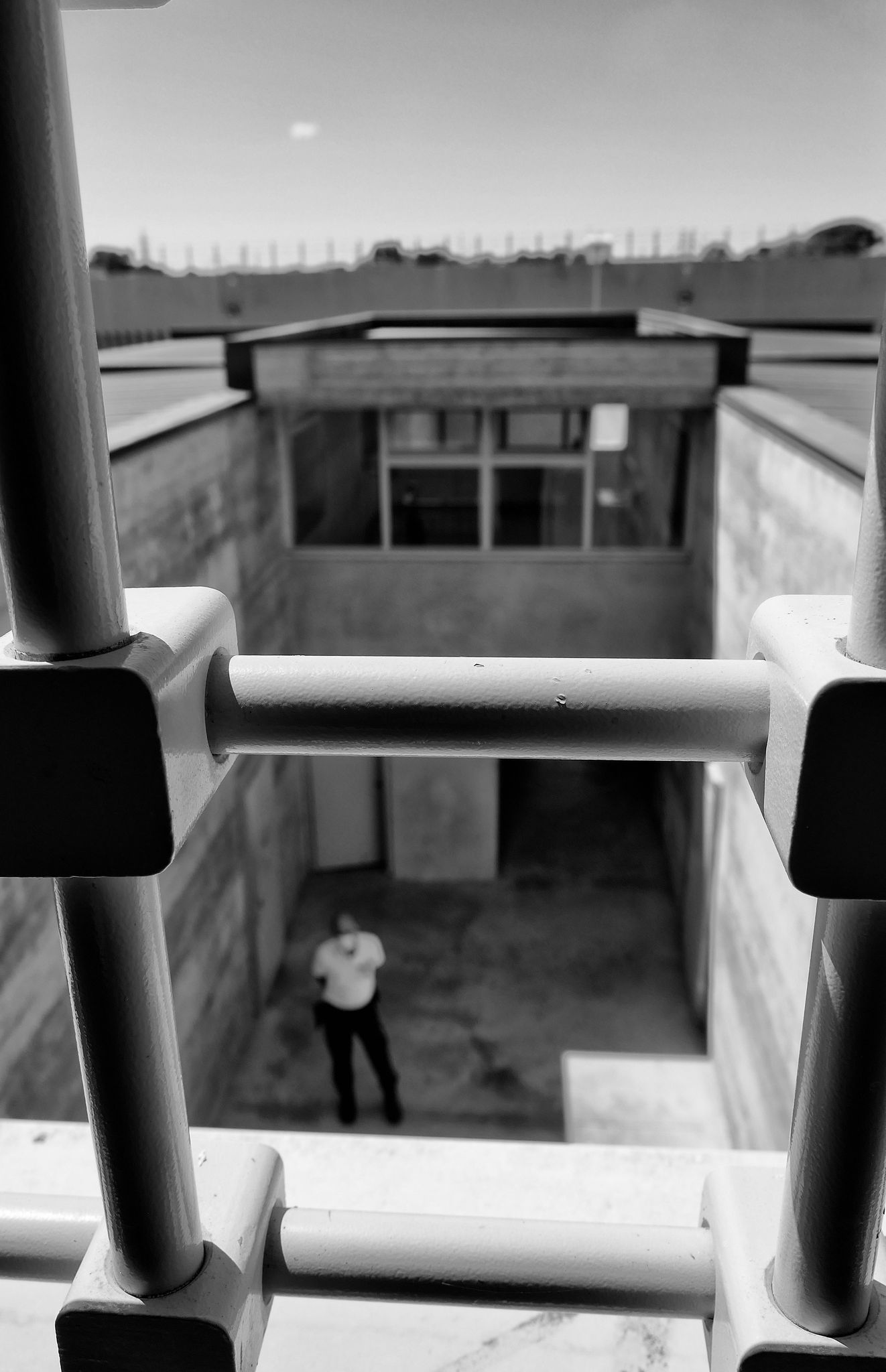 In another photo, inmates’ shoes can be seen on display at the barred windows, looking like an affirmation of static presence, waiting to get back on their way. 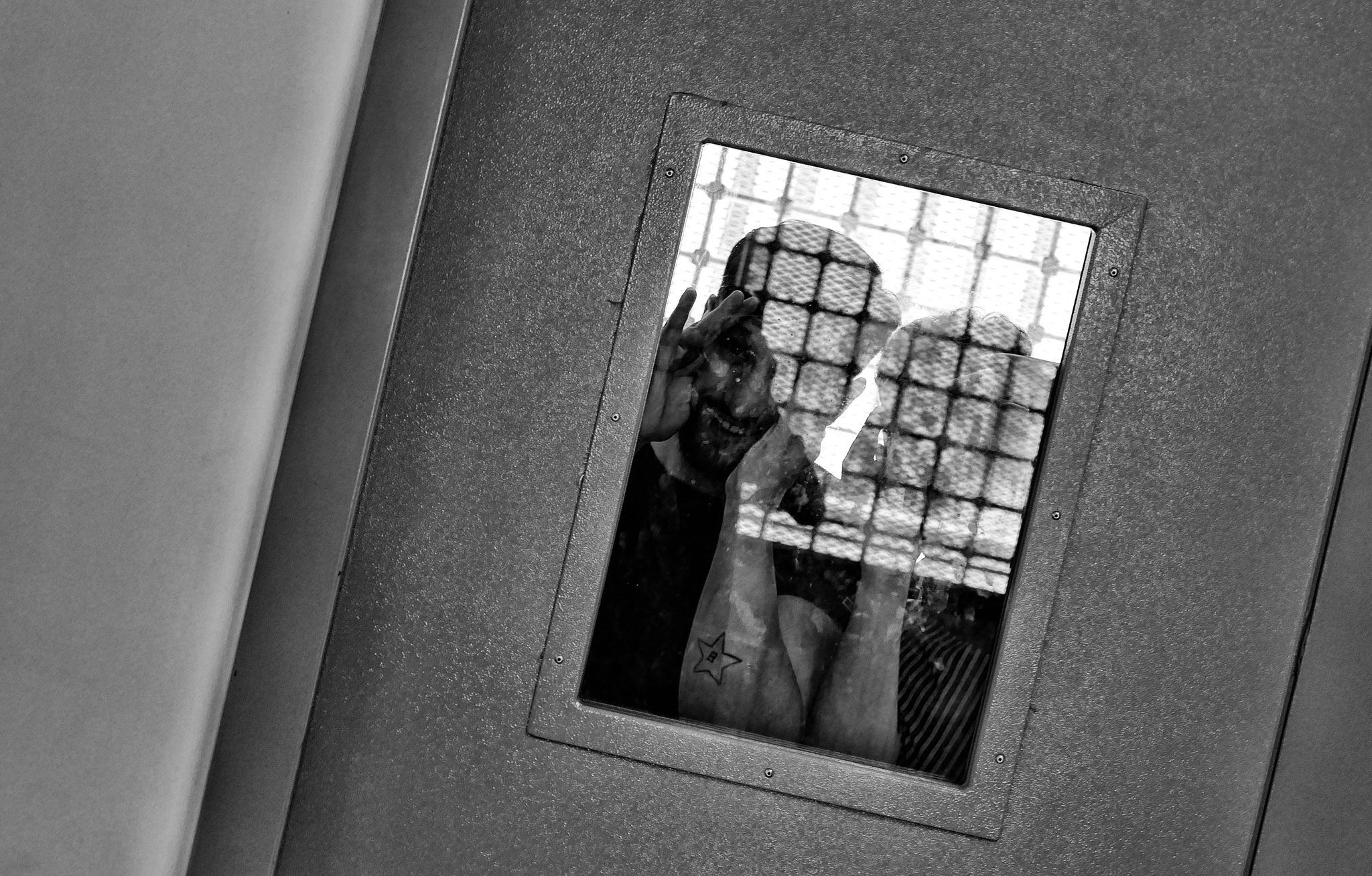 Then there is a photo of a bundle of keys in hand ready to open or close many doors, a photo that looks to a present of closing or bringing closer anticipating the moment of opening and leaving.

But the photo that, more than any other, recounts the condition of suspended souls is the one showing the two figures through the window of a security door, which is used for surveillance but, in this case, allows us to see. These people are standing on the other side, inside, a condition of suspension between appearance and reality; these are faceless silhouettes of a fabric of nets and bars that narrate the negation of the individual in advantage of the indistinct, representing a lost, suspended identity.

Anima (soul) derives from the Latin masculine animus, which means spirit, and it comes from the Greek ànemos, which means wind, so it is the principle of life and of ourselves, an intangible but essential component, the origin and fulcrum of being, the home of feelings and sensitivity, of that authentic sense that is perceived without resorting to the senses. We all have it. Silent, hidden, missing, but it is there, always and in any case.

This photograph shows it well, and should be observed with inter-ligence, that is the ability to read between the lines, in the gaps between the letters, to retrace the not written saying. 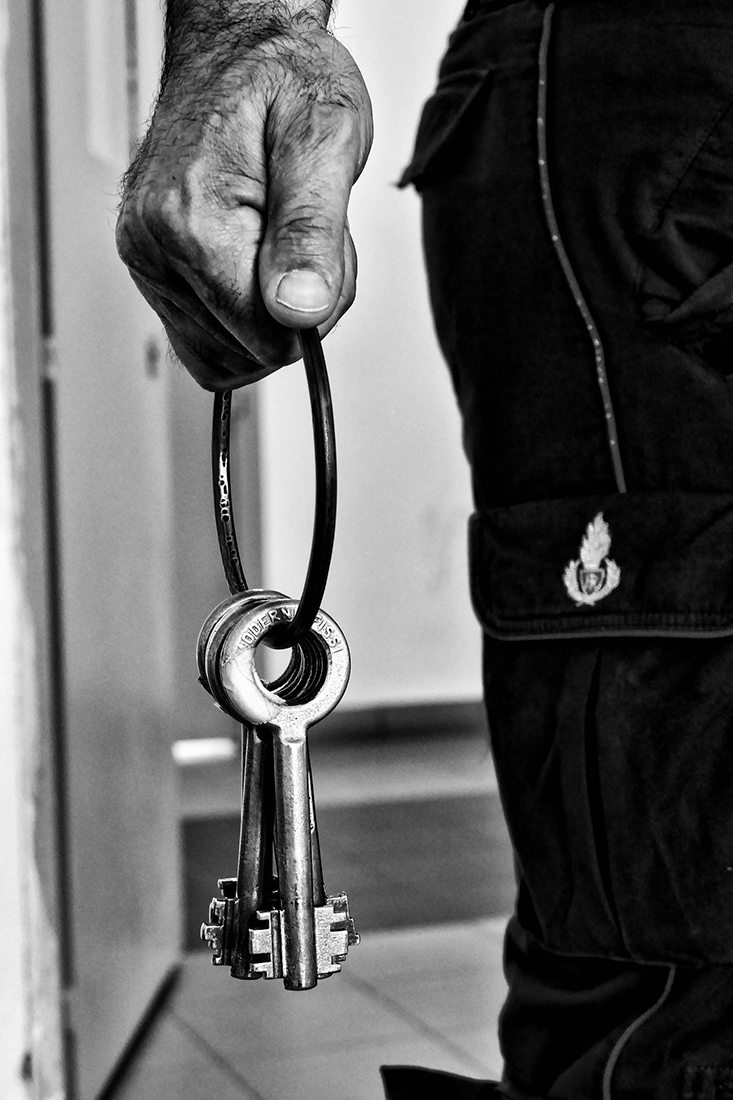 The key to understanding is in the detail and in the shadows: we can glimpse the nose, the mouth, the eye, and the hands, one holding the face the other resting on the glass to show and reveal the double gaze of him looking and us seeing.

Those are things of another world, our world: that man is me, those men are us, not other than us, and there is nothing left but to love them, nothing left but to love ourselves, suspending judgement and dedicating ourselves to non-attachment, something different from detachment, which is rejection, removal, renunciation, mutilation of a “them” which is at the same time part of us and other than us.

IMAGINE THE STORIES TO CHANGE THE... 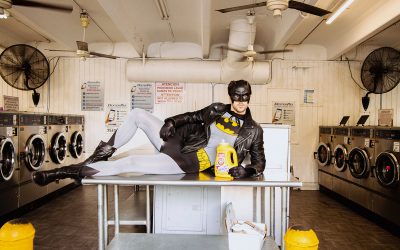 Where have the Superheroes gone? 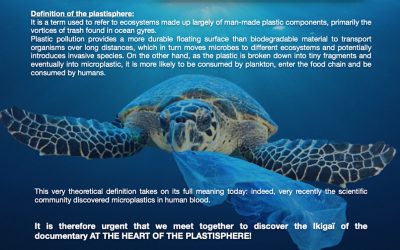 AT THE HEART OF THE PLASTISPHERE

“AT THE HEART OF THE PLASTISPHERE”...