Crimes of the Future

I came back from Cannes a few days ago after missing it for the past two editions, well, one was cancelled and last year I felt that COVID was still living amongst us and did not want to face the crowds. I don’t know if you’ve ever attended the Cannes Film Festival but between the onlookers and the attendees it is pretty difficult to navigate the walk along the Croissette especially from 4pm onward when what I imagine to be the locals, line up at the chance of getting a selfie or an autograph from the stars. For the most part if you want to cross the street you most likely will have a two block detour. Film lovers from around the world are here, power deals are made and, if you are lucky you will be able to book a few tickets for the screenings.

Last year they instigated a new system which lets you reserve 4 days prior to the day you want to attend a film and you only have a window between 7 am to 8h30 am to book your film. The system sometimes crashes and by the time you do get through, very little remains that you have access to. I probably made a mistake to cancel an 8h30 am screening of Funny Pages as it seems to have received good critics. Thing is if you want to see an 8h30 screening even if you have your ticket you need to be at the theatre no later than 8am and I thought…unless I was dying to see it…  A few years ago my friend, Vincent Gagliostro,  and I tried to see the 8h30 screening of Pedro Almodovar’s Pain and Glory. That year, 2019, we were at the theatre at 7h00 am, this was before the online ticket sales, the system was that you waited for more than an hour and by the time Vincent and I got to the entrance…no more seats.

Enough of that, Crimes of the Future:

Crimes of the Future was the long awaited film by David Cronenberg, he’s back to science fiction with rather squishy body horror in a retro-futuristic setting. The film stars Viggo Mortensen, Léa Seydoux, and Kristen Stewart. It’s a film noir which features performances artists Viggo Mortensen (Saul Tenser), Léa Seydoux (Caprice), Seydoux performs extreme surgery on Mortensen, the cutting up of the body is the new sensuality or stated as  “surgery is the new sex.” The film is set in the future however Cronenberg wrote the script in 1999. A fleshy jellyfish-like object controls the surgery as tumours are extracted and mysterious new body parts grow in their place. Tenser is appreciated for his ability to grow novel internal organs. Caprice extracts them with the object that looks like a controller out of a Milton Bradley Simon game eaten by a deep-sea isopod which splits skin like a ripe fruit. Meanwhile Kristen Stewart (Timlin) plays an investigator from the National Organ Registry which is established to shed new light on the next phase of human evolution and seems to be aroused by the bloody wounds of Viggo Mortensen.  The real horror is in what looks like a chocolate bar that you see people eating from the very beginning of the film which contains toxins. The mystery of the film is around the accelerated evolution syndrome that Tenser suffers from and by doing the performance art seeks to maintain control over his own flesh. Between the toxic bar that is deadly and the tumours…the film does deal with topics like climate change, pollution and micro-plastics. The opening scene has a beautiful little boy eating a plastic wastebasket… In Cannes everyone was talking about the film. Some loved it, some not so much but no one hated it. None the less it was not given any awards. Frankly I preferred Crash and Videodrome and although this sounds hard to watch it really isn’t. 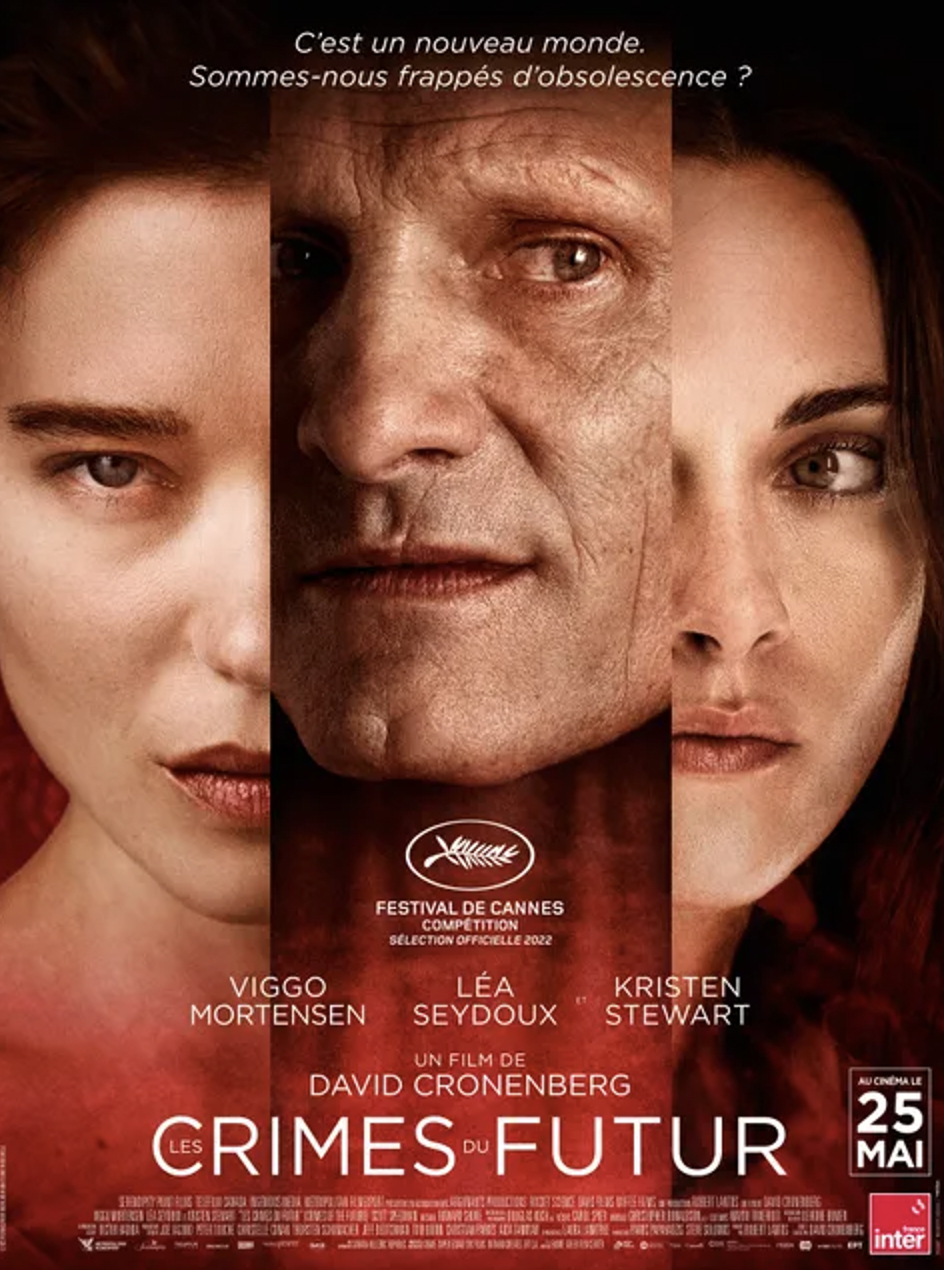